The Broadmoor Hotel, the five-star luxury resort here in Colorado Springs, boasts a Christmas season display including over a million twinkly white lights. The weekend after Thanksgiving crowds gather on the grounds to witness the illumination, which starts with a countdown and ends with the flip of a big switch.  Instantly the Broadmoor is delivered into the Christmas season. It’s a spectacular sight and a tradition that’s been carried on for thirty years.  I can’t imagine how long it takes to put it all together.

Christmas lights are one of my favorite expressions of the season. I marvel at the time and energy some of my neighbors invest to produce a display that – like the one above – can probably be seen from the space shuttle.  Surely you have a similar house where you live (or a hotel) where the lights and the decorating borders on the ridiculous.  Or maybe you just tune in to “The Great Christmas Light Fight” (Mondays on ABC), where “decorating to the extreme” can win you a cash prize and the coveted Light Fight trophy.

We have a house in our neighborhood covered in nothing but purple lights.  It’s actually quite appealing but I question the choice of color.  Most people still use strands of multi-colored lights of course – more LED than incandescent these days.  Sometimes you see animals or trains or colorful scenes.  Those always remind me of Lite-Brite, a toy I had as a kid.  Lite-Brite was a simple light box fronted by color-by-letter templates.  You plugged colored plastic pegs into the template and when you were done, you turned off the lights and switched on the box to display a glowing, colorful picture.  My more artistic friends would forego the templates and make their own creations in the dark.

I see Christmas lights everywhere this time of year; not just on houses.  Traffic signals blink red and green.  Ditto airport runway demarcations.  And how about those overhead lights your drive-thru bank uses to indicate which lanes are open or closed?

It shouldn’t surprise you to learn the first Christmas “lights” were candles, glued with melted wax to tree branches in the wealthier homes of late-nineteenth-century Germany.  Electric strands came along several years later (Great Britain claims their invention); originally referred to as “fairy lights”.  Finally, several cities – San Diego, New York City, and Appleton, Wisconsin among them – claim to have originated the outdoor Christmas light display, which only seem to get bigger and more elaborate by the year.

Perhaps you’re like my family.  Other than the tree itself we’re lucky if we string one hundred (let alone one million) lights on the outside of our house.  I like to decorate a tree or two in the yard instead, but the house itself stands in the shadows.  Perhaps it’s because I fell off a ladder one year reaching across the top of the garages. Perhaps it’s because I prefer the look of the “candle in the window” (so much easier to put up!) 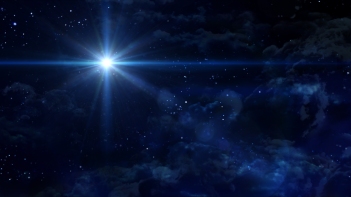 Less is more in my opinion.  One of my favorite decorated houses in our neighborhood combines a simple outline of white lights on the house with a few colored trees in the yard.  That works for me.  Even a single white light will do as long as it’s bright enough.  So goes the Methodist hymn There’s A Song In The Air: “Ay! the star rains its fire while the beautiful sing…”  Referring of course, to the star of Bethlehem.  The one true and luminous Christmas light.