Behold the Thanksgiving feast. Turkey and stuffing – a meal unto itself. String beans with mushrooms, dripping in butter. Crescent rolls (because you can never have enough carbs at Thanksgiving). Every side dish imaginable, or at least enough to fill up the empty spaces on the table. And then there’s dessert. Homemade cookies and cakes. Pies galore – pumpkin, apple, and cherry. And way over in the corner – completely overlooked like a little kid begging for attention – mince pie. 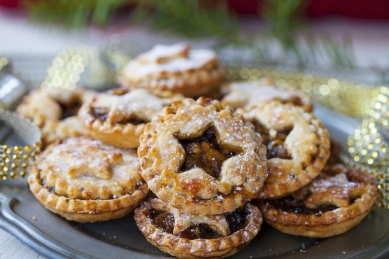 I love mince pie. It’s an exorbitance of flavors, provided you like the ingredients of course: raisins, dried apples, and molasses, blended with generous helpings of cinnamon, cloves, and nutmeg; topped off with two or three shots of brandy. For the spices alone – which were said to represent the gifts brought to Jesus by the three kings – mince pie is sometimes referred to as Christmas Pie.  But early Americans didn’t celebrate Christmas, so mince pie made it to the Thanksgiving table instead.

Mince pie has a colorful history. The Brits get credit for the pie itself, but the Middle East gets credit for the fruits and spices, discovered by European crusaders on their travels and returned to their various homelands. Mince pie was originally a dinner pie – meat included – with the spices added to hide the sometimes “off” taste of meat without refrigeration. Over time the meat was left out entirely so only the fruit and spices remained. The pie literally morphed from savory to sweet (and from “mincemeat” to just “mince”).  At one time mince pie was banned from dinner tables, frowned on as a religious symbol by Puritan authorities.  I’m glad I don’t live in a time of Puritan authorities.

If you’re looking to salvage a few calories as you roam the Thanksgiving buffet, don’t go anywhere near mince pie.  Were you to consume the whole pie you’d be talking 3,600 calories, and that doesn’t even include the essential topper of brandied cream (“hard sauce”).  Were you to only eat the filling you’d still take in almost 400 grams of carbohydrate and 250 grams of sugar.  But you’d take in no fat and almost no protein.  It’s like consuming a concrete block.  If someone threw you in the East River after a generous helping of mince pie you’d sink to the bottom in nothing flat.

Making mince pie is quite the chore.  Take a pie shell, dump in a jar of mince filling, top with another pie shell, and bake at 425 degrees for thirty minutes.  To be honest, the hardest part of making mince pie is finding the jar of mince.  Your local supermarket may carry it but they usually hide it deep in the lowest shelves of the baking aisle (are they embarrassed to carry it?)  One time I found a jar that looked dusty and dated, as if it had been back there since the last Thanksgiving.  Another time the checker humiliated me by saying, “No one ever buys this stuff.  Why would anyone ever buy this stuff.”  Well, I buy this stuff, pal.  Because I like mince pie.