You’re probably typing on your keyboard as you read this.  But imagine you have a handwritten document sitting upright in front of you and you’re simply copying the words one keystroke at a time.  Now imagine you have several keyboards at your disposal, each on top of the next like stair steps. Your hands move up and down the stairs, finding just the right key for each letter.  Finally, imagine one more keyboard beneath your feet, which you occasionally depress like the gas pedal of a car.  This my friends, is but a hint of what it takes to play a church organ.  It’s a complex, hard-to-grasp skill requiring an absurd amount of focus.  It’s abstruse. 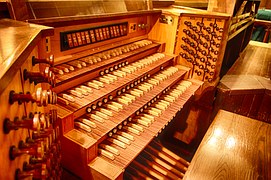 The Basilica of the Sacred Heart at the University of Notre Dame is scheduled to receive a brand new organ; the first note to be played during the Christmas holidays in December 2016. This is the fifth organ in the 165-year history of the Basilica and as you would expect, the most impressive. The instrument will boast four keyboards (five if you count the one beneath the feet) and almost 5,200 pipes.  The pipe diameters are as small as a pencil and as large as a ship’s smokestack.  Listen for the shrill tone of a tin whistle or the booming alert of a departing cruise liner – this organ can duplicate both.  It can even duplicate the soprano, alto, tenor, baritone and bass sounds of the singing human voice.

An organ of this complexity and size – it will soar to almost four stories in height – is taking several years to construct.  But most remarkably, it is being assembled in the modest workshop of Paul Fritts & Company, in the outskirts of Seattle, by a grand total of six craftsmen.  The University chose this group because its founders were trained back through several generations, dating to those who built the most prominent cathedral organs in Western Europe.

Next spring Fritts & Company will host an open house in their workshop, to show off the nearly completed Notre Dame organ.  Then next summer when the University’s campus is relatively quiet, the organ will be shipped from the West Coast to Northern Indiana to be assembled in time for that first performance a few months later.  Can you imagine the responsibility of the drivers of those several flat-beds, trucking so many handmade components over the mountains and across the plains to their final destination?  They should have a police escort to clear the highways.

When I was in middle school I took organ lessons for a brief time, learning on a modest instrument in the loft of the small chapel of our Methodist church.  There were only two keyboards for the hands and a small keyboard for the feet.  I found it overwhelming to play with hands and feet at the same time.  To further complicate the skill – and this is true of most organs – there are a few milliseconds of delay between the time a key is pressed and the sound is issued (thanks to the mechanics of opening and closing the organ pipes).  So you’re playing the music a moment before you actually hear it.

I did perform in public once.  Every year our Methodist leaders would allow the church youth group to conduct the Sunday services – from the sermon to the bible readings to the music.  Our organist “rigged” the sanctuary organ for me so it felt more like playing that small chapel organ.  A little less abstruse, if you will.  Regardless, that was the end of my career as an organist.  Two hands on the single keyboard of a piano (with little else for the feet and brain to worry about) is more than enough for me.