Red’s Giant Hamburg – Springfield, MO – may be America’s first drive-thru restaurant. Red’s opened in 1947 from a converted gas station, closed in 1984, then opened again last year. In the United States it’s not really “fast food” without the drive-thru, is it?  McDonald’s certainly agrees, as does Burger King.  But Taco Bell, they think outside the tortilla.  Just last year the Bell opened a taco-themed hotel and resort in Palm Springs, CA.

A taco-themed hotel and resort – really, you ask?  Yes but more on that in a minute.  It helps to cover some of Taco Bell’s earlier adventures first.  Founder Glen Bell started his restaurant in the 1960s as the copycat of a local Los Angeles walk-up taco stand.  The concept of “American-Mexican fast food” quickly franchised to 100 locations in less than five years.  Today you’ll count 7,000+ Taco Bell locations in two dozen countries.  Two billion customers frequented the Bell in 2019.

I’ve always admired Taco Bell… er, from afar.  I can’t tell you the last time I navigated TB’s drive-thru (probably my kids’ high school days).  Don’t get me wrong, I love Mexican food.  But eating at Taco Bell is like supplanting an Italian artisan pizza with a Little Caesars.  In other words, I prefer my Mexican at authentic Mexican restaurants.

But there’s no denying Taco Bell’s success.  They chose six or seven essential ingredients and spun an entire low-cost menu out of them.  Take the $1.49 soft taco.  Four components: seasoned beef, lettuce, and cheese, inside a soft tortilla.  Add sour cream, tomatoes, or other options, but you’ll pay $0.40 or more for each.  The only freebies are the hot sauce packets at the pick-up window. 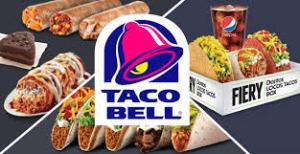 From the Taco Bell soft taco evolved an entire zoo of animales.  You have the Taco Supreme, Chalupa Supreme, Cheesy Gordita Crunch, and (for the really adventurous) the Nachos Cheese Doritos Locos Taco Supreme.  From the Taco Bell burrito you get the Burrito Supreme, Grilled Cheese Burrito, Beefy 5-Layer Burrito, Quesarito, and Crunchwrap Supreme.  Again, all of these wild animales come from pretty much the same small set of ingredients.

Taco Bell’s successful run endures at a time when foodies lean more towards farm-to-table organic.  So why does it still work?  Marketing.  Taco Bell’s all about creative thinking.  Some examples:

Which brings us to the Taco Bell hotel.  In the summer of 2019, TB converted an existing Palm Springs resort into a live-in advertisement, “the biggest expression of the Taco Bell lifestyle to date”, according to its Chief Global Brand Officer.

Not only did they slap the TB brand all over the resort, but they also offered the full Taco Bell menu, poolside cocktails “infused with a Taco Bell twist”, a “not-to-miss gift shop” (including a Forever 21 fashion line of Taco Bell apparel), and a salon where nail art and hairstyles were decidedly “Bell”.  The resort was a pop-up, only intended to operate for a few days, but reservations sold out within two minutes of being offered.

Taco Bell has one more menu item I didn’t mention above: the Spicy Potato Soft Taco.  Er, had.  The Bell discontinued it but not before Bryant Hoban (of O’Fallon, MO – not far from Red’s Giant Hamburg) purchased and froze three of them.  A few weeks later Hoban sold the “mint condition soft tacos” through Facebook.  For $70.  Each.  With that kind of endorsement, it’s safe to say the Bell will be ringing for many years to come.

Some content sourced from Wikipedia, “the free encyclopedia”, and the Fox News article, “Taco Bell is opening a taco-themed hotel and resort”.

7 thoughts on “Standing on Tacos”