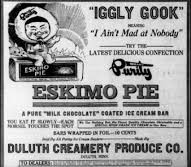 Years before Haagen-Dazs, Klondike, and Dove Bars competed for your freezer space, you had a revolutionary creation known as the Eskimo Pie.  Foil-covered, with a thin coat of chocolate magically adhered to a small bar of ice cream, the Eskimo Pie was the first of its kind: a two-desserts-in-one sensation brought to market almost a hundred years ago.  The version I remember (from the 1960s) was a hockey puck – a little larger, a little flatter – with mint ice cream in the middle.  Today, the (Dreyer’s) Eskimo Pie looks no different than any other ice cream bar.  Someday soon it won’t even be called an “Eskimo Pie”.

You know what I’m talking about, of course.  Eskimo Pie lands on the list of brand names considered negative racial stereotypes.  Before you know it, Eskimo Pie will be rebranded into something more socially acceptable.  News to me, “Eskimo” is considered derogatory by the Inuit and Yupik people of Alaska.  An “Inuit Pie” doesn’t sound quite as tasty but maybe Dreyer’s should adopt the name anyway.  At least they could retain the cute little fur-lined character they already have on the box.

I get it; I really do.  As much as the Caucasian and the male in me make it virtually impossible to stand in another’s shoes, I still empathize.  Brands get spanked because their names, images, or associations are knowingly insensitive – even harmful – to groups of people.  That needs to change, even if it means renaming a product that’s been around a century or more.

My mother may have been a woman ahead of her time.  When I consider the brands I was raised with, I remember Minute Rice (not Uncle Ben’s), Log Cabin Syrup (not Aunt Jemima or Mrs. Butterworth’s), and Challenge Butter (not Land O’Lakes, whose logo centered around the image of a Native American woman).  Nothing controversial about my childhood brands (thanks Mom!)  The only character who might’ve caused a stir was the leprechaun on the Lucky Charms box, but I don’t think the Irish made a fuss about him (yet).

While you’re wondering about the new names for Aunt Jemima and Uncle Ben (the latter announced just yesterday as Ben’s Original), broaden your perspective a little as these other products/people/places step up to the home plate of scrutiny:

Then you have businesses like ManpowerGroup Global, Five Guys Burgers and Fries, and Two Men and a Truck.  There’s just no winning with these (unless you label 50% of the company/restaurants/ fleet as the female equivalent?)

I found it funny the (former) Washington Redskins couldn’t come up with a socially acceptable team name in time for the 2020 NFL season, so they’re simply known as “Washington Football Team” today.  That’s so generic I picture every player on the roster identical: same height, same weight, same hair color, same number on the jersey.  With that in mind, here’s some advice for the Edmonton Eskimos of the Canadian Football League.  Come up with a new name pronto.  Not the “Edmonton Inuits” or “Edmonton Yupiks”, neither of which roll off the tongue.  Just something, else you’ll be known as “Edmonton American Football Team”.  Uh, come again?

Some content sourced from the 6/19/2020 USA Today article, “Are the Washington Redskins Next?…”, the ONGIG article, “20+ Top Brands Changing Their Name to Avoid Racial Bias”, and Wikipedia, “the free encyclopedia”.