A once-popular saying – now sprinkled with dust – goes, “there’s nothing like the feel of a well-tailored suit”. It’s been awhile since I bought a tailored suit (off-the-rack seems to do it these days), but there’s something to be said for “feeling as good as you look”. If the shirt, belt, socks, shoes, and even pocket square aren’t carefully coordinated however, the suit falls short. And what about the necktie? Once upon a time the tie question was, “which knot should I use?” Now the better question might be, “should I even bother”?

Neckties seem to be more of a fashion statement than staple these days.  Once an indicator of labor (vs. leisure), ties are now disappearing altogether, in favor of the open collar (if there even is a collar).  The irony of today’s neckties is you’re more likely to see them on a security guard or restaurant waiter than you are a CEO or bank manager.  Today’s fashionistas likely dismiss ties as a passing fad akin to the sweater vest or leg warmers.  Yet in their current post-cravat form, ties have been around over two centuries.

Neckties didn’t mark labor (vs. leisure) so much for me.  Rather, they marked California vs. Colorado.  In my early years in the workforce in California, as an architect and then airport planner, I unfailingly wore a tie to work.  I also wore a suit, or at least a sport coat.  The nature of the work however – hovering over a drafting board with pencils and other instruments of design – demanded the coat be relegated to the closet for most of the day.  As for the tie, we architects developed a habit of throwing the tail over the shoulder, much the way the superstitious toss a pinch of salt.  As a result, I have more memories of the back of a tie than of the front.

Once I moved to Colorado in the 1990’s, and my job moved to the technology sector, ties retreated to my bedroom closet for good.  Twenty-five years on, my need for them equates to weddings, funerals, and a handful of restaurants with dress codes.  Quite a contrast from my childhood, when ties were worn not only every Sunday in church, but also on every trip on an airplane.  Thank goodness my parents bought me the “clip-on” variety.  As a kid, I had no clue how to tie the knot.  I didn’t a care for a “noose” around my neck either. 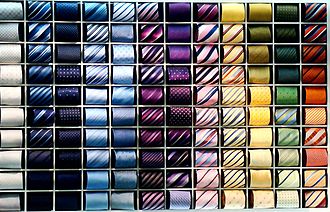 Neckties carry more history than today’s post allows.  They evolved from costumes of war, with the cravat becoming the first formal statement.  Several variations followed, but it was the “Langsdorf” – or “long tie” – which eventually took hold.  Along the way, ties morphed from short to long (and back to short again), and from wide to narrow (and back to wide again).  Neckties changed from white to black, from solid-colored to striped, paisley, and geometric.  Ties even went through a phase where the designs were more free-form and specific; vertical artwork if you will.  Picture a big fish, head down.

Here’s an interesting bit of tie trivia (assuming the topic comes up at your next party).  In Britain and its Commonwealth countries, diagonal stripes on ties run from the left shoulder down to the right side, as a nod to the regimental dress of the military.  In the United States, it’s the opposite – right shoulder down to left side.  Don’t believe me?  Go check the closet or your local department store.  (I’ll wait.)  Furthermore, those stripes aren’t really on the diagonal.  If you unstitch the tie into the single piece of cloth it started with, you’ll see those stripes run horizontal.

Neckties birthed some elegant terminology, like Steinkirk, Solitaire, Ascot, Langsdorf, and a handful of words just for the knots (four-in-hand, Pratt, Shelby, Windsor).  Speaking of knots, guess how many ways you can tie a necktie?  Eighty-five – although only thirteen are recognized as symmetrical and balanced.  One of those, the Atlantic, boasts a knot tied backwards, but on a forward-facing tie.  I like it.

Someday I’ll donate my ties to Goodwill (or sell them on Etsy – the makers out there are doing cool things).  Now however, they’ll serve as a reminder of the way things used to be: in some ways good; in other ways a little tight around the collar.

Some content sourced from the 12/2/2019 Wall Street Journal article, “The Knottiest Problem: What to Do With a Closet Full of Old Ties?”, and Wikipedia, “the free encyclopedia”.

One thought on “Untying the Knot”