Let’s admit to one of the unspoken axioms of commercial air travel, shall we?  When it comes to flying, we do everything we can to avoid sitting next to a stranger. In an open-seating approach like Southwest Airlines, it’s all about the aisles and windows, pinning our hopes on that almost-extinct creature known as the open middle seat. Turning the corner from the jetway and gazing down the narrow aisle, our brains simply erase the middles from the seating plan. We’ll go all the way to the last row before we’re forced to sit beside a stranger. It’s like boarding the big yellow bus in elementary school, forced to choose a seat next to a kid you don’t already know.  Haven’t changed much as adults, have we?

Call me a lost cause, but I’m here today to extol the virtues of the middle seat.  There really can be peace in the center.  Thanks to my wife (who prefers the window seat for all kinds of reasons), I’ve chosen the middle seat for countless flights in our marriage.  Used to be, we’d take the aisle and window and leave the middle open, with decent odds for extra storage and elbow room.  These days?  An open middle is about as likely as getting bumped to first class.  It just doesn’t happen. 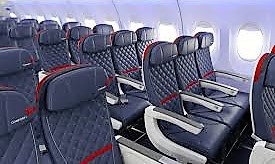 I know what you’re thinking.  A middle seat forces you to sit next to a stranger (assuming you’re traveling alone or as a couple).  Not a problem, as long as you drive the situation.  After your stranger joins you, you have about fifteen seconds to engage them in a conversation.  Those fifteen seconds are your one chance where a meet-and-greet feels natural, because you’re both still settling in and probably making a little eye contact.  Sixteen seconds in however, you’ve lost your chance.  I can’t tell you how many times I’ve waited until the tail end of the flight (that “safe” moment when you realize you’ll be off the plane and gone in fifteen minutes anyway), only to find out I was sitting next to one of the nice/normal ones out there. 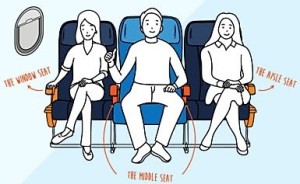 Here’s another rule about middle seats.  You need to find your comfort zone with the armrests.  There’s not a lot of real estate on those babies, so inevitably you’ll be jockeying with your neighbor to figure out how to share.  Just make sure you don’t let your neighbor take the whole armrest from the get-go.  If you do, your middle-seat space will feel super-cramped. (Why did a ’70’s rock band just come to mind?)  In other words, you’ll experience “armrestlessness” the remainder of your flight. 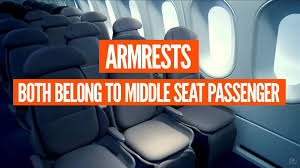 Strangers and armrests aside, let’s acknowledge some of the hidden positives of sitting center.  First, you have the easiest access to all the ceiling gadgets.  Adding light or air or a flight attendant to your environment requires nothing more than a casual reach overhead.  Your seatmates have it more difficult.  They’ll often add an “excuse me” to their movements, or even ask you to do it for them.  Sometimes that means bodily contact. Ick.

Second positive: you avoid the shortcomings of the window and aisle seats.  What are those?  The window seat personal space is noticeably smaller than other seats (including the storage space below the seat in front of you).  The window seat is also be noisy if you’re near the engines.  The aisle seat personal space is constantly interrupted by the happenings in the aisle itself: roving flight attendants, drink carts, and all those other strangers on the plane.  And here’s the ultimate penalty for sitting in the aisle seat:  you’re sitting between your seatmates and their freedom (i.e. the lavatory).  Every time they’re up and out of their seats, so are you.

Speaking of airplane lavatories, I avoid them until my bladder pulses me into levitation.  It’s not an issue of cleanliness or claustrophobia, but rather the journey to get there from your seat.  Here’s my ultimate nightmare: I get past the aisle seat and head to the front lav.  I find it occupied, which means I head to the back (no lines allowed in front).  On my way to the back, the seat belt sign dings and flight attendants guilt me into returning to my seat.  Mission unaccomplished.  Hold please.

Final though: be bold and choose the middle seat on occasion.  You might enjoy it as much as I do.  Then again, in-between comes more naturally to me. I was a middle child growing up.  I live in a middle state in the U.S.  I like to think of myself as slightly above average.  In other words, fair-to-middling.