Last week I flew to Indiana for a conference, connecting briefly through Chicago O’Hare.  After finally touching down and exiting the tiny plane, I noticed a cluster of passengers right there in the jet bridge, waiting for luggage to be brought up the stairs.  I headed to the baggage claim area instead, where the rest of us watched the carousel lumber round and round.  The minutes passed interminably as the belt continued its relentless rotation; passengers leaving one-by-one with their bags.  Suddenly everything came to a grinding halt, and the carousel let out its big, mechanical sigh.  I found myself in the quiet and solitary confinement of an empty claim area.  My luggage?  Nowhere to be found. 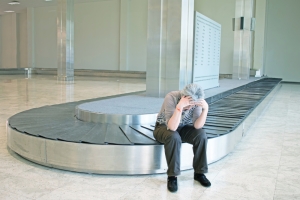 The airlines advertise a ton of performance statistics, but here’s a new one on me: rate of mishandled bags.  For every passenger who files a lost-luggage report, the carrier gets a ding.  That ding is well-deserved, representing the stress of lost luggage, the hassle of filing a report in one of those stuffy little offices, and the inevitable delay reuniting with your bag.  Not that it happens very often.  According to the following chart – part of a Wall Street Journal article – American Airlines reports a mere 2.8 incidents of lost luggage per 1,000 passengers.  But hold the phone, folks – there’s more to the losing than meets the eye.  Turns out American (and most other airlines) avoid a lost-luggage ding if they alert you to the “mishandled” bag.  Today’s smart tags make it easy to track the bag (even if it’s heading in a different direction than you are).  So that bit of information – proactively communicated in a text or email – avoids a bad stat.  And that’s why the chart below shows a dramatic improvement in August.  American Airlines started its proactive notification process the month prior. 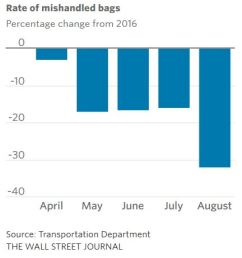 I don’t choose my airline according to “rate of mishandled bags” (or any other statistic for that matter – it’s all about the ticket price), but I have observed the adjusted behavior of others.  Carry-on baggage is all the rage now, in brand-new shapes and sizes.  Look around next time you board a plane and count how many passengers violate the airline’s carry-on policy.  The person with the roll-y suitcase and oversized backpack is probably one bag over the limit.  The person with the valise slightly larger than the space “under the seat in front of you” probably should’ve checked it.  But chances are the flight attendant won’t make a fuss, at the risk of negative publicity. 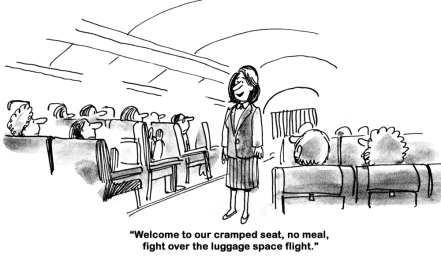 Speaking of backpacks, the oversized versions seem to be all the rage these days; far surpassing the number of “wheelies” and “over-the-shoulder’s” so common with past generations.  It’s like everyone’s back in high school again. 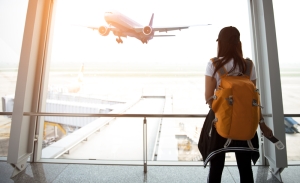 Here’s another trend.  Passengers carry-on instead of checking, knowing there isn’t enough room in the overhead bins.  Once the bins are full, they surrender their bags at the end of the jet bridge instead, for attendants to tromp down the stairs and into the belly of the plane.  After landing, the process works in reverse (thus the cluster of passengers on my recent flight).  But credit to these travel warriors; they avoid $50 of baggage fees, as well as smashing bags into overhead bins (which always brings to mind square pegs and round holes).

One more trend.  Airlines are shifting the baggage-check process into the hands of travelers.  At self-check-in, the kiosk now dispenses a bag tag along with the boarding pass.  You attach the tag to the bag.  You haul the bag to the belt, where – in some cases – you place the bag on the belt.  Congratulations – you’re an airline employee working free of charge.  You might even be helping the airline avoid a mishandled bag stat.

My own lost-luggage story had a happier-than-expected ending.  At the baggage service office, the attendant took my tag into the back, reappearing moments later with my bag.  Turns out my suitcase flew on another plane, arriving at my same destination before I did (explain that bit of magic, please).  Crisis averted, but instead I lost my excuse to go purchase a suitcase of new clothes.