One of these days I’m going to visit Norway. The allure of Arctic glaciers, fjords, and waterfalls beckons me to snowshoe north of the Baltic Sea. My wife and I toured Denmark and Sweden a few years back, but if I were to choose only one of the Scandinavian countries it would be Norway. I must have a little Viking blood in me. In fact, my AncestryDNA results say I have about 14%. 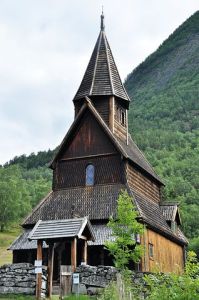 Besides its spectacular natural environs, Norway is known for hearty wooden structures that dot the land. Stave churches – quaint, timber-framed buildings from medieval times – can still be found in many of the villages.  One of the most famous is likely the most recognizable structure in Norway – the Urnes church in Songnefjorden (above photo), built back in 1130 and still standing today.

Here’s an even bolder proposition for my Norway expedition.  After I make the pilgrimage to the Urnes church, I could hop a plane four hours to the north, to the island of Spitsbergen in the remote archipelago of Svalbard.  I’m still in Norway but I’m a whole lot closer to the North Pole.  And it is here, 430 feet above sea level, I would find what may become the future most recognizable structure in Norway: the Svalbard Global Seed Vault.

The Svalbard Seed Vault is exactly what it sounds like – a place to store seeds.  Why would a country spend more than $9 million to build a seed vault?  Because bad things happen in this world, putting our food supply at risk. After reading about Svalbard I learned there’s an entire network of seed vaults around the globe (including one right here in Colorado).  These vaults contain food crop seed samples in the event the world “runs out” someday.  But even the vaults themselves have no guarantees.  The national seed bank of the Philippines was destroyed by fire, and the seed banks in Afghanistan and Iraq were lost to the ravages of war.  That’s where Svalbard comes to the rescue. 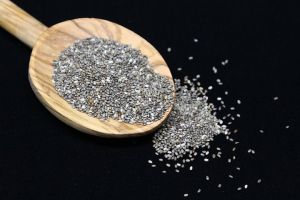 Svalbard is the “seed vault for the seed vaults”.  Think of it as a library.  If one of the world’s vaults needs a replenishment of seeds (or some global crisis destroys the vault entirely), they “borrow” packets from Svalbard.  Once more seeds are generated, a portion of them are returned to Svalbard to restore the library.  Almost 900,000 food crop varietals are represented in Svalbard – by half a billion seeds.  The facility is the size of a football field and all those seeds don’t even make it to the fifty-yard line.  Plenty of room left for more.

Svalbard is likely the most secure seed vault on the planet because it’s buried four hundred feet inside a sandstone mountain, encased in the Arctic’s permafrost.  Svalbard recently made the news when the vault flooded from snow melt and early season rain (that’s not supposed to happen – global warming anyone?)  But the water didn’t make it any further than the vault’s entrance tunnel before it froze again.  Sounds like all those seeds will be cold, dry, and undisturbed for a long time – just as the vault intends them to be. 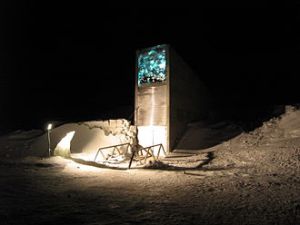 Here’s another reason to like Norway.  Government-constructed projects exceeding a certain cost must include artwork.  Svalbard was expensive enough, so the seed vault entrance is decorated with stainless steel, mirrors, and prisms, reflecting the polar light of the summer months.  In the winter, the entrance is illuminated with greens and turquoises and whites through fiber-optic cables.  With this installation we get to appreciate the “importance and qualities of Arctic light”.  Pretty cool.

Sadly, if my Norway sojourn ever included the Svalbard Seed Vault, I wouldn’t get past the entrance.  There’s no receptionist (nor any other staff members 0n-site).  Instead the facility is monitored from a remote location around the clock.  You have to pass through five levels of security to get to the seeds themselves.  Tourists like me have no shot.

I won’t be getting to the Arctic anytime soon after all.  As for Norway, I’ll have to be content with a visit to a Stave church or two.  But I’m grateful for the Svalbard vault all the same.  On that note, I think I’ll head over to Home Depot and buy a few seed packets for my summer garden.

One thought on “North Pole Vault”