Here we go again, time-travelers. This Sunday at 2:00am a good portion of the world will effortlessly move backwards one hour as we roll off of Daylight Savings Time (DST). It’ll be dark outside earlier (no more “summer nights”) and it’ll still be dark when most people wake up. Slam the door on summer – our days will feel shorter for the next eighteen weeks.

The rules of DST have changed over time (ha), at least here in the United States.  The concept itself was borrowed from the Germans as a way of conserving fuel, and began in 1918; the same time the U.S. adopted “standard time zones” (Pacific, Mountain, etc.).  At first it was a federal mandate in conjunction with wartime activities.  Several years later DST was abandoned entirely.  Then it was turned over to the individual states to adopt (or not).  Finally, DST was given formal guidelines in 1966 as part of the Uniform Time Act.

DST still feels like an experiment with no satisfactory results.  In 1974-1975 the U.S. tried DST for an entire year, but went back to the on-off approach when concerns were raised about kids heading off to school in the dark.  In 1986 DST was extended from the half-and-half calendar to include the entire month of April.  In 2005 DST was extended again to the first Sunday in November -to accommodate trick-or-treating on Halloween.  That last modification was only eleven years ago, for a concept that has been around for a century.  Any bets the rules of DST will change again?

Arizona (outside of their Navajo lands) and Hawaii may have the last laugh.  Both states leave their clocks untouched while the rest of us move backward and forward year after year after year.

Whether or not DST continues, this much is true.  On Sunday I will be resetting two alarm clocks (my wife’s actually auto-adjusts but doesn’t understand post-2005 DST), three wall clocks, three temperature gauges, two thermostats, two car clocks, and several appliances and watches.  Any of these products could be designed to auto-adjust (like phones and computers) but maybe their creators don’t trust the DST rules won’t change yet again?

A word of advice about Sunday’s change.  Proceed with caution when you head out on Monday.  Not only will it be darker, but your body clock – which can’t be adjusted with a button – will be slightly out of kilter.  Strange things happen the day after clocks adjust, including more accidents between cars and people (if certain Department of Transportation reports are to be believed). 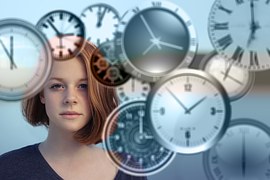 Last thought.  Today’s word is mnemonic, which refers to any means of making the retention of information in the brain easier.  MNEMONIC is also an acronym for “Memory Needs Every Method Of Nurturing Its Capacity” (I like that).  That brings to mind a couple other mnemonics.  The Great Lakes can be remembered with HOMES (Huron, Ontario, Michigan, Erie, and Superior).  The bass clef in music (the notes A,C,E,G) can be remembered with “all cars eat gas”.  And of course, DST has its own mnemonic to determine which way the clocks adjust.  Remember: “Spring forward, Fall back!”

3 thoughts on “Let’s Do the Time Warp Again”