In the heart of timeless Rome, not far from the Pantheon and the Coliseum and the Vatican City, lies a field of flowers.  The Italians call it the Campo de’ Fiori (literally, “field of flowers”) and it is a welcome retreat from the bustling metropolis that surrounds it.  The Campo is open and happy and bright; a sanctuary nestled within a vast maze of winding streets and crowded buildings.

You can see the Campo in the photo above: the rectangular area with all the white tents.  Admittedly the Campo is not really a field, but rather a piazza (a public square).  But the place abounds with flower-vendors.  And the square hosts a daily food market, bars and restaurants, and a bath-like fountain to keep all those cut flowers fresh. 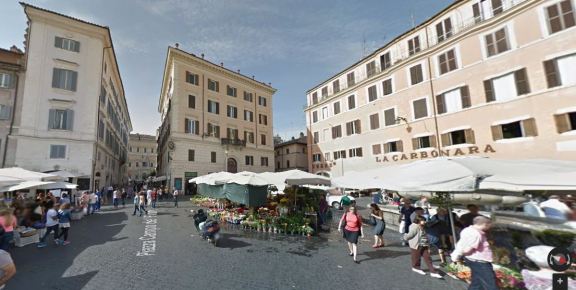 The Campo has a special place in my heart, because in 1982-1983 I spent nine months in Rome, studying architecture.  The Hotel Lunetta (also in the map photo at the upper right) was our “dorm”, and the streets of the city our “campus”.  The Campo was our “quad”.  It was where we played Frisbee (while the Italians played soccer alongside us).  It was where we had our laundry done or grabbed a snack or shopped for conveniences.  But mostly it was just a cozy place to hang out after classes.

The Campo is one of Rome’s smaller piazzas.  To contrast, here’s a photo of nearby Piazza San Pietro, the vast open space in front of St. Peter’s Cathedral in the Vatican City: 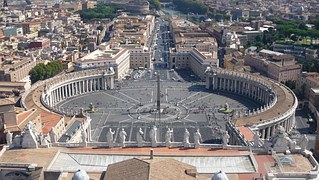 The Campo has an interesting history that dates back to the Middle Ages (see https://en.wikipedia.org/wiki/Campo_de’_Fiori).  It really was a field to begin with, until a Cardinal had it paved over in the fifteenth century.  Many of the buildings that surround the open space are the originals from hundreds of years ago.  My wife Brigid, an equestrian, would enjoy the fact that a) the one church on the Campo is for Santa Brigida (a Swedish saint), and b) the square was once the site of a twice-weekly horse market.

The Campo also boasts a not-so-nice aspect.  In the seventeenth century the square was used for public executions, particularly for those at odds with the Church.  Almost in kind, the Campo of recent years has become a gathering place for drunken tourists, soccer enthusiasts, and overzealous youth, earning the distinction of “one of the most dangerous places in Rome at night”.  What a shame.  Perhaps the Campo should remain a keepsake memory for me instead of a place to revisit – my Campo – an unspoiled sanctuary more akin to a field of flowers.

One thought on “Field of Flowers”